The pressure sensor is configured such that the resistance decreases between the wires of a node when a pressure is applied to it. 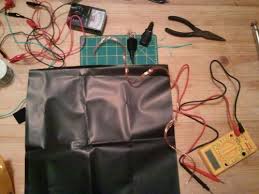 Initially the simplest approach seemed to follow a guide on instructables entitled How to Make a Rediculously Cheap Analog Pressure Sensor. This design relies on a simple concept and produced the left two sensors in the image above. Since the foam is designed to insulate, is has a resistance rating that is a function of foam distance. Sheets of this foam are commercially available. In fact it is possible that you already have some, as it is often shipped with integrated circuits. Generally, the static resistance is listed for a particular insulation foam on the product page. A typical value is 105 Ohm/sq. Conductive foams of varying densities can be found at retailers such as here at Amazon.com.

For this project, a relatively high density foam was used with the thought that low density foam has an equivalent rating (as specified by that supplier) but may be stiffer and deform less under a load. This would provide a greater range of pressures.

The next option considered was constructing a Velostat sensor, right most sensor in the image above. Velostat is a similar material which has various uses which similar the the foam also including protecting electronics. Velostat is a material similar to the material that makes up anti-static bags. An example implementation for this approach is exemplified here. More information about Velostat can be found here.

Velostat is incredible cheap and can be found here for example. The previous link is to blockemf.com. Apparently some people use this stuff to build blockers for brainwave scanner.

A similarity between these two approaches is the need for a set of two crossing conductive wires that have an insulator between their intersection. The idea of using a conductive ink pen and essentially drawing the wires of the conductive layers on was explored. 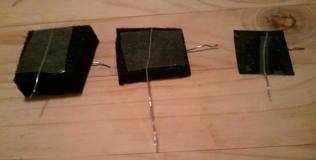 The Velostat sensor worked very well producing nearly linearly proportional resistances when pressure is applied. The characteristics can be seen in the YouTube video above, narrated by Kirk Haroutinian. The resistance varies from about 3.5 - 4.5 kOhm under a squeezing load. The foam sensor did not work as well. It required a very large pressure to get a reasonable response for the tactile sensor application.